Have you ever created a post or page in WordPress and found the following weird code staring at you?

Yeah? Chances are you copied the content straight from Word and pasted it right into the WordPress editor. To prevent this from happening in the future use the Paste From Word feature as pictured below. 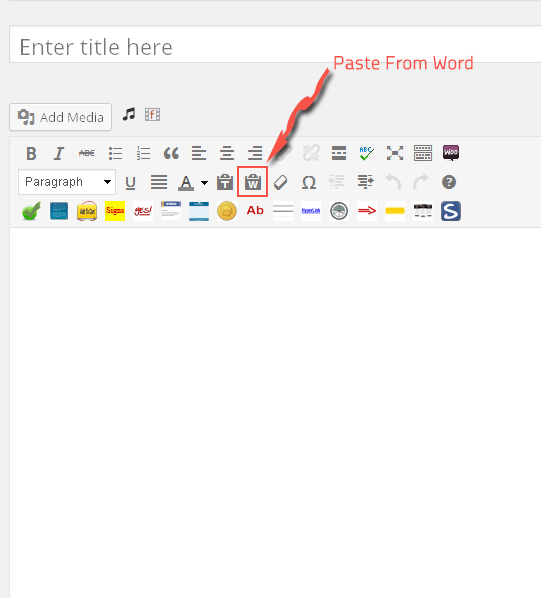 Using the Paste From Word feature strips out the Word formatting commands from your WordPress page or post.

In the event that you do not see the Paste From Word icon in your editor, click on the Show/Hide Kitchen Sink icon

. This will reveal a second row of editing icons/features.

For more information about the Paste From Word feature in wordpress, please see the WordPress Support page.

I put it off long enough. My site was in desperate need of optimization. I installed the popular W3 Total Cache plugin and then began the task of configuring it for my needs. I will not get into the specifics here – I will let the plugin’s developers and experts guide you on the configuration.

I won’t lie, it took some time to get the site configured with W3 Total Cache but when all was said and done, I was sad to see that while the pages loaded much quicker, the graphics of the Simple Social Icons plugin displayed garbled nonsense. You can see what I’m talking about below –

I found others had similar problems but what resolved their problems had already been coded and accounted for by the developers of the W3 Total Cache plugin.

I tried a few things to no avail but because I minified the CSS of the site, I went to the Minify settings at – {website.com}/wp-admin/admin.php?page=w3tc_minify and scrolled down to the Advanced area and specifically the Never minify the following CSS files setting. In Never minify the following CSS files field I entered the path to the Simple Social Icons’ style sheet which in my case was => /wp-content/plugins/simple-social-icons/css/style.css

Once I made that change …

Stay up to date with the latest news, product announcements, and more by signing up for our email newsletter. Don't forget to follow us on your favorite social sites as well.